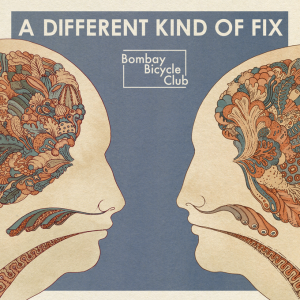 So after last year’s critically acclaimed Flaws, a delicate, acoustic driven sophomore LP, Bombay Bicycle Club have returned with their third album, entitled A Different Kind Of Fix, and how right they are. Within 15 seconds of opening track ‘How Can You Swallow So Much Sleep’s’ looping guitar riff commencing, it sounds like the sound of their first album. But there is something new lying beneath the obvious indie-guitar driven sound this time around; it’s something that shows a band willing to take chances, to play around with their sound, and ultimately, a band getting it very right.

With Animal Collective collaborator Ben Allen having an input in this record, the swooning, fractured electro sound associated with Animal Collective seeps into several of the tracks. As mentioned earlier, the opening track has a very reminiscent Bombay Bicycle Club riff, but then we get jittered, jumpy vocals in places, with smooth harmonies sandwiched in there as well. First single ‘Shuffle’ plays a similar trick, but with a fantastically wonky piano track running as the main ingredient around which everything else is built. Lucy Rose lends her vocals alongside Jack Steadman’s on Shuffle, and it’s a trick that is repeated on other tracks. It works well due to her having the same timid sounding voice as Steadman, while also having this charming sweetness quality to it. Shuffle is pinned down as track six, and really feels like the lynchpin of the album. Everything that precedes it feels like it is brought together in that one track and everything that follows it takes that sound in other directions.

Another stand-out track is ‘Lights Out, Words Gone’ as Steadman and Rose’s vocals intertwine sweetly. ‘Beggars’ opens up coyly in a Flaws kind of way, before the pace picks up, with the bass and percussion being as creative and imaginative as we’ve come to expect from this band, providing a whole extra level of depth to their sound. ‘What You Want’ is energetic and beautiful, with perky runaway-train sounding guitar riffs slicing through the peak of the chorus, as Steadman sings: “You can rearrange me now,” just about summing up the ethos of the album.

It’s a triumphant success for a band that are merrily riding their bicycles through whichever genres they please, as they continue to grow, develop and firmly cement themselves as one of the best bands this fair country has to offer.

Well it certainly feels like a long time in coming, but Copy Haho has finally treated the universe to their debut, self titled album. After their 2009 EP, Bred For Skills and Magic, and a few singles in between, the record is being released on the band’s own label, Slow Learner.

Opening track ‘Factory Floor’ offers the perfect introduction to the self-deprecating, melodic, indie-rock flavoured sound that lies ahead. Lead singer Joe Hearty lays down a marker early on in chiming: “But I remain the same dumb artist, chasing sales.” Immediately the growth in their sound from that earlier EP is recognisable, with an extra depth both melodically and lyrically.

Track 3 ‘Wrong Direction’ showcases some meatier guitar riffs, with a fantastic current of energy running throughout. However, those dancing, arching guitar riffs that Copy Haho is so well known for are still in abundance. ‘Waiting For Something To Happen’ flings itself around excitedly as Hearty turns a neat phrase in smirking: “I’ve been so busy, waiting for something to happen.”

On ‘A Winter On The Run’ and ‘The Be Good’ we get a taste of the slower Copy Haho sound. It comes off feeling a little flat, as the band sound at their best when whizzing past at 140mph. ‘Demons and Gods’ opens up with one of the best riffs on the album, frantic and jagged, ably assisted by the crashing of drums. This is the kind of track that either makes you want to learn to play the guitar, or to smash one up in rock and roll style after pretending to play that delicious riff.

Rather than end on a slow song about death (When It Gets Dark), the album closes on the band at their peak, on the mesmerising ‘Accent Changed’. As Joe Hearty mentioned in his interview with CDX last month, the track was initially recorded as the opening to the record, with a fuzzy, echoey intro which still remains intact. Once through the cloud of haze, the drums crash, the guitars weave their magic, the bass fuzzes along underneath, keeping everything cogent. The last minute and a half is one of the few moments on the album where they allow themselves to get away from a particularly set structure as things get a little more free-form, and it’s blindingly brilliant.

It’s an album that is a lot more hit than miss, with some big memorable moments, sharp lyrics, and a lot of energy coursing throughout.