Just before turning the ripe old age of 25, I discovered a concept known as a mid-mid life crisis. Y’know, one of those made-up millennial generation fads, this one based on the idea that you don’t have to be 40 with a mortgage and kids to experience a mid-life crisis. I turned 25 and lo-and-behold, self-diagnosed myself as having a mid-mid life crisis. This generally involved being more of a shambles than usual, committing some minor criminal offenses, wanting to leave my job and start a record label, and making a spectacular mess of any potential relationship. With hindsight, and a year to look back at it, of course it wasn’t a crisis. I was still trying to adjust to the fact that I wasn’t a student anymore, as much as I might act like one.

Tokyo Police Club’s brand new record – Forcefield – got fired over to me in the early, bleak days of a British January, and it has brought all those memories flooding back. I guess it helps that the vocalist was also born in 1987 (and has the same name as me), so is also going through the whole ‘I’m not twenty anymore but definitely not thirty either’ feeling.

Lyrically it’s a record full of anxieties, ideological escapism, and dealing with life’s little adventures. Of course, being Tokyo Police Club, it’s all wrapped up in perfect indie pop-rock noise. So often, on a first or second listen to a record, you’ll think it’s either a ‘lyrics-first’ album [Los Campesinos!, I’m looking at you], or a ‘music first’ album. Forcefield somehow manages to be both of those things at once, which is a rare quality.

Looking at the band’s back catalogue, they’ve never strayed over 4 minutes for a single track. This feels like a reflection of their ability to distill all of their ideas into easily digestible little nuggets, filled with more hooks than you can shake a stick at. So seeing that the opening track of Forcefield is over eight minutes long makes you afraid that they got really into The Mars Volta during that four year gap since Champ. But instead, we’re presented with an epic triptych that nimbly and cleverly journeys through the stages of a relationship. At the beginning, it’s just hope and excitement of getting together with someone, speaking in the future tense: “I want you wearing my t-shirt,” all with the puppy-like over-zealousness and energy reflected in the tempo. The middle section wakes up in a fuzzy, half-asleep state, as vocalist and bassist David Monk realizes the mistakes that he made. This then sends us tumbling into recriminations as he apologises for his behaviour and speaks of the relationship in the past tense, but in TPC’s typically hilarious and astute manner: “If I was I lighthouse, I would look all over the place / If I was an asshole, thank you for keeping a smile on your face.”

Sonically, the record is imaginative enough to give it staying power, with the odd curveball thrown in to make sure you’re still paying attention. ‘Toy Guns’ has a whirring bass line in the verses that drops frequently like some pesky six-year old kept on unplugging the bass amp. Either that, or the guitarist got the final call on the mix. ‘Tunnel Vision’ rattles thunderously with a bass-driven intro, and rolling drums in the final, emphatic chorus.

I would never refer to myself as being a writer, because firstly, no matter how David Duchovny makes it look in Californication, just saying this to someone will not make them sleep with you, and secondly: David Monk manages to put into words these bizarre thoughts that float around all of our heads so acutely, whereas I am the aforementioned shambles. Tack that onto the fact that this band know how to write a catchy beast of a song and they’re on to something special.

Well I was all set to write about a new SBTRKT track called ‘Highs and Lows’ that I heard tonight while cycling through a river to get home. However, it appears not to exist on the INTERNET yet, which is weird. So instead, here’s something else I heard while wading through said river.

It’s called ‘Delorean Dynamite’ and by the one and only Norwegian not currently competing in Sochi at the Winter Olympics, Todd Terje. Dude looks like a disco prince. I don’t think I want to say that much about it really. It starts off a little coy and Tron-like, before opening up and finding some ridiculous funk about 3 minutes in. That’s when I start to lose my mind. And fall into a river/zebra crossing.

Welcome to the year of the horse.

Regular readers of my foolish dim-wittery will have been subjected to seeing me prattling on about the possibility of a secret Foals show in Oxford taking place this week. But while there was that hope, there was always the possibilty that this was all just a glorious figment of my imagination.

We’ve all watched Foals grow from awkward-angular Oxford trendsetters all those years ago with their debut album Antidotes to becoming a huge global name with their third LP, Holy Fire. With this massive status comes issues for those of us that wait endlessly to see them play again in Oxford. The biggest venue in Oxford barely holds 800 and Foals have been busy playing multiple shows at The Royal Albert Hall and (very soon) at Alexandra Palace. In my head I was dreaming of some kind of huge homecoming event in Headington’s South Park in the summer, akin to what Radiohead did ten years ago or so.

And so it was that I found myself in a rampantly hot and sweaty Oxford Academy 2 room last night that barely holds 400 people, seeing a triumphant homecoming show, and realising this is what we all really wanted. Something intimate and connected, not something vast and expansive.

But let’s go back to the beginning. They finally announced the show on Friday, one day before the show itself, with tickets going on sale on the Saturday morning. 50% online, 50% from the box office on the Cowley Road at 10am. This was a genius way to make sure that the show was as much for Oxford folk as possible. Online seemed like too much of a gamble for me, so I was one of the hardy and hungover few who got to the box office at 7.45am. It was rough, and it wasn’t pretty, but it was something I had to do.

Bonus points if you can see my bald spot

The queuing experience was actually a lot more fun than it had any right to be. It wasn’t raining! It was really well organised with all the senior box office staff coming in stupidly early on a Saturday morning. The security guard folk hadn’t actually been to sleep since working the previous night but were in remarkably good spirits, and brought round free tea and coffee to us idiots. Everyone involved had a real sense of how important this gig was, with the opportunity to welcome home our idols being a very rare and special thing.

Commenting to friends in the queue we called this our Harry Potter or iPhone 5 moment; that time where you want something so bad that you are prepared to queue up endlessly for it. Of course, there was to be no people driving past yelling spoilers like ‘Snape Kills Dumbledore!’, instead we half expected people to drive past yelling out the planned setlist as a spoiler. Perhaps not quite the same impact. ‘They’re playing Inhaler!? Noooooooo.’

We got our tickets but then had to wait for about 11 hours for the damn thing to happen. I ran off to Birmingham to watch the opening weekend of the Six Nations with friends and drink like I was a student again. So after England’s last-second defeat I was tired, emotional and a little bit drunk. I hot footed it back to Oxford just in time for the show.

And then I realise I’ve written 500+ words on queuing. I’m so British sometimes in hurts.

In all the chaos and excitement of the announcement of the show, I didn’t even realise that Foals had decided to play the upstairs Academy 2 room. Of course they could have sold out the downstairs room, they could have sold it out 10 times over. But climbing the stairs and realising we were going to be in this sweaty little box of a room where smaller bands usually play was just incredibly exciting.

We all sandwiched ourselves in and waited for this thing to happen. With only enough space for 1/16th of their usual lighting rig, it blared viciously away as they took to the stage and opened up with ‘Prelude’. The whole show was completely anarchic from start to finish. Seeing the band sharing this tiny stage together felt really special, as we’ve grown so used to seeing them dominate such huge stages.

You have to be a special kind of nutcase to get up at 7am on a Saturday to queue for tickets, and so equally the crowd was full of nutcases. But lets replace nutcase with ‘really committed fan’ and you can understand why the atmosphere was so incredible. We all moved as one. Everyone knew every word. Everyone jumped around like crazy. Everyone lost their shit for the breakdown in ‘After Glow’. Everyone lost all their shit for ‘Providence’. Everyone sat down for Spanish Sahara.

And then we had Yannis taking frequent trips into the crowd. Jumping over the front and surfing while still playing his guitar. Running round to play from on top of the bar. During brief breathers we’d get a sense of how much they were enjoying playing a show in Oxford again. Yannis would say something like ‘We write all our songs here!’, or before going into the resident show-closer ‘Two Steps, Twice’, ‘Oxford, represent!’. But beyond us (and myself) just fawning over Yannis, it was so excellent to see all of the band playing up-close. Jack and Walter turning out their swampy, murky grooves on bass and drums was a particular highlight. It was appropriate too since the room turned into a swamp about halfway through track two. Who knew humans could produce so much sweat. Even my sweat was sweating. 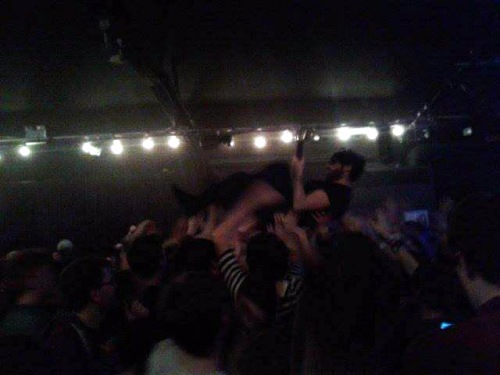 Yannis on his way to Kebab Kid 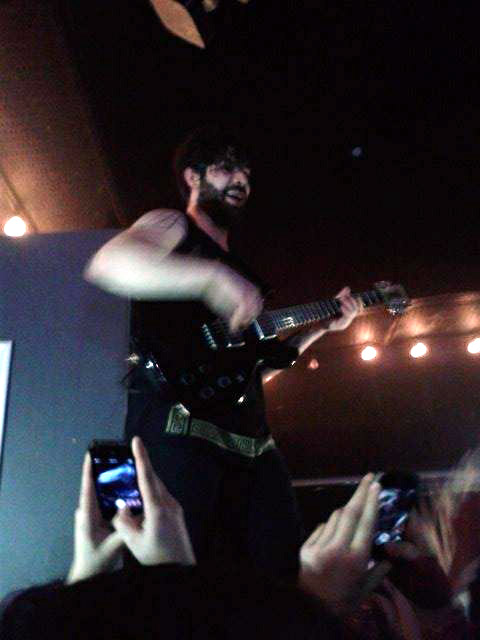 The show felt so monumentally special and I felt so privileged to be a part of it. But now I’m spending a Sunday trying to figure out how to carry on with my life. I’m lucky enough to go to so many gigs because people are kind/stupid enough to ask me to write nonsense about it. But this was just a moment of pure unadulterated excellence, and something that only comes along once in an era.