I’m a latecomer to Parkrun. Like ordering a salad at a restaurant, I was aware that it was a thing that you could do, but never did. I started running 10ks, half marathons and full-blown marathons back in 2010, but never “Parkran”.

One of my favourite things about running races is the feeling of camaraderie with other runners. I ran through a constant torrential downpour in the Oxford Half Marathon in 2013 with an army of equally foolish people. I ran the Edinburgh Marathon in May 2012 on one of the hottest days of the year, with residents utilising garden hoses and Super Soakers to hose down runners as they passed by. There’s a certain spirit that is borne from these events. You cross the line and pat the runner beside you on the back, complain in unison about those brutal hills, or ask if they also saw someone dressed as King Kong sprint past you or if it was a figment of your imagination. But then you go your separate ways, and never see that person again. And that feels a little bit sad.

I “committed” to going to Parkrun in Oxford toward the end of 2017. By that point I’d been a couple of times after getting a ride from my old housemate Holly, but many weekends I would just sleep instead. For some reason, it wasn’t until she moved out and I had to cycle the 3 miles each way in rain or shine that I became a regular. 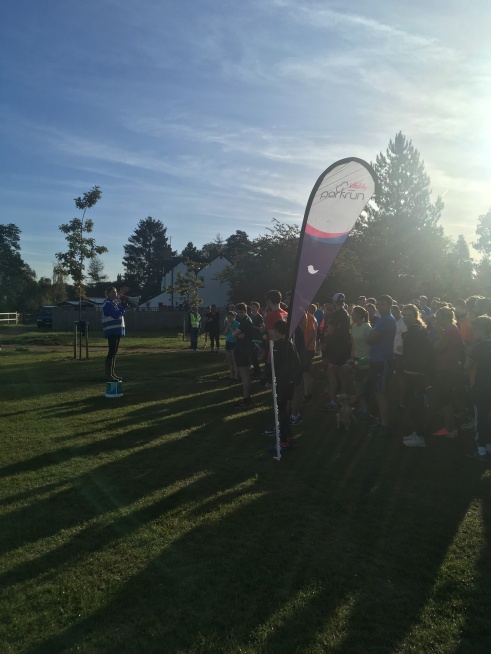 At this point, Oxford’s Parkrun is well established, so between 300-450 people show up each week. You start to feel that sense of camaraderie as you find yourself running alongside the same people most weeks. You feel a sense of community as you volunteer from time to time to help the event take place. A small part of me always wondered what it was like at the beginning as they slowly built up Oxford’s event, with fewer people in attendance, and everyone running and volunteering knowing each other. But that’s just my inner hipster talking.

At 8:55am on a Saturday morning a few weeks ago, I found myself in bed in Ann Arbor, Michigan on a work trip. I’d been there a few months earlier too, and had rather-optimistically searched for a local Parkrun, with no luck. To put this into some kind of context, Ann Arbor is the 230th most populous city in the US, and to date there are only 27 US parkrun events. So the odds were not in my favour.

But rather than get out of bed and eat Mac ‘n Cheese for breakfast that Saturday morning (which is something I definitely didn’t do, wink wink), I did another cursory search. Of course, I found that Ann Arbor’s FIRST EVER Parkrun was about to start in 5 minutes. Perhaps my superpower is being able to sense Parkruns nearby. After being mad about missing it for a minute, I set about figuring ou how to cycle the 3-4 miles to get there next Saturday.

For some reason I decided to write on their Facebook Page just to say hey! I’m here! I’m hoping to come! I think the real reason I did it was because I half-expected them to call it off with snow and freezing temperatures forecast, and if they knew some foolish tourist was planning to come, they could at least spare me a grizzly death by letting me know it was cancelled.

Instead, I ended up getting to experience what’s probably the most quintessential Parkrun experience: A new Parkrun finding its feet, and an incredibly welcoming set of race directors, runners and volunteers spread out across three different events that I got to attend.

After writing on their Facebook page, the founder of this new Parkrun, Stephanie Evans, reached out and offered to give me a ride. Steph might say she was just paying it forward after another Parkrunner did the same for her when she arrived in the US, but it just goes to show how far people go to help each other out as part of this community. It certainly sounded a million times more appealing than cycling in sub-zero conditions. So on the Saturday Steph and her husband Richard picked me up for Ann Arbor’s second ever Parkrun.

Steph and Rich hail from Leeds, and as with so many Parkruns overseas, this was another case of Brits moving abroad and wanting to bring that Parkrun experience with them. If there’s one thing I learned about them above all, it’s that they miss having access to good Indian food. And for that, I truly felt their pain, despite only being away from the UK for three weeks on this trip. It was literally the first thing I did when I got back.

We arrived at the park on that first Saturday, set up the course and started talking to those getting ready to take part in spite of the freezing temperatures. Watching Americans try to take in a run briefing done in a Leeds accent was a joy to behold. I’m secretly hoping by the time I get to return that everyone who attends is also speaking in a Leeds accent as a result of spending Saturday mornings with Steph and Rich.

The course itself is pretty special. Three laps of a wooded trail around a lake, and a pretty stunning lake crossing. That first time I attended there were 26 runners, and the following week 48, the majority of which headed down the road for coffee afterwards along with the volunteers. Although this was only the second and third official events, I discovered that new Parkruns hold a number of test events before launching. This meant there was already a real sense of togetherness among volunteers and runners which is what helps make Parkrun to be such a success.

There was also a Thanksgiving day Parkun in ‘nearby’ Livonia, a 30 minute drive away that Stephanie and Richard also let me tag along for. Livonia was the first ever US Parkrun established way back in 2012, so for Parkrun nerds it’s almost as cool as going to Bushy Park in London, home of the first ever Parkrun. Temperatures were absolutely freezing for the Thanksgiving run, and being the plucky / stupid Brit, I only had shorts to run in, with only one other runner wearing shorts…….who was of course also a Brit. The event was full of another bunch of super-friendly volunteers and runners, and the course was flat and quick so I was just 15 seconds off my P.B., despite having spent three weeks eating and drinking EVERYTHING in Ann Arbor. 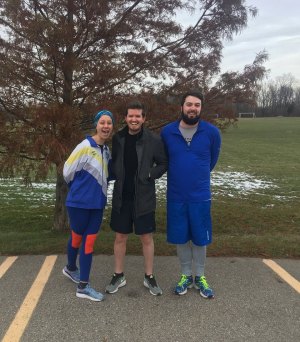 Suddenly my trip was over. It’s now a week since I got back to the UK and I still have this fuzzy warm feeling. It’s either from that Parkrun experience or a Mac n’ Cheese breakfast doing strange things to my internal chemistry.

I’ve always felt a kind of community from running my local Parkrun, which is what I always felt was missing after finishing those one-off races in the past. However the nature of my US Parkrun experiences really brought home the fact that it takes a huge crew of passionate and dedicated people to help make these free, timed 5k runs happen every week across the world. I want to run them all and tell every race director and volunteer what a difference they make. A small part of me wishes I could stay in Ann Arbor and get more people running that Parkrun every week. But I think I’d miss good Indian food too much.

This entry was posted in Everything Else, Oxford Stuff. Bookmark the permalink.