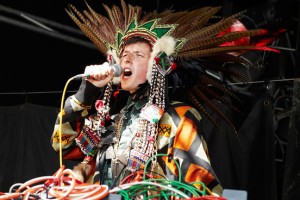 We all know about the ethereal properties of the harp; the ability to induce a wistful other worldly realm, often leading to some sort of time travel adventure. What is lesser known is what happens when horses play harps. As it turns out, it leads to me being able to directly predict the future.

So it gives me great pleasure and a large dollop of smugness to reveal that one of HPH’s 2012 predictions has come true already. To quote that  previous post: “A full length record could really help Oxford’s-own Orlando Higginbottom (Totally Enormous Extinct Dinosaurs) etch his music further into people’s skulls.” And hey presto, as I chanced upon discovering this morning while buying the new Maccabees album online (it’s a bit special), Amazon told me that 2012 will see a debut album from Totally Enormous Extinct Dinosaurs.

Of course, upon further research, I’ve now discovered that Orlando has been talking about this debut album as far back as summer last year, but this horse is a bit deaf. But who cares. The album drops in June and to whet your appetites, here is the excellent Household Goods from the EP of the same name which I was lucky enough to review for Culturedeluxe back in 2010.