As a resident of Oxford, I cycle. A lot. It takes me about 7 minutes to cycle to work. If there’s traffic, well, it’ll be a tortuously slow 8 minutes. If I hit every green light, I can be there in 6 minutes. As great as that is, it still means I get to work feeling like I’ve only just woken up. If only I had a long commute.

A couple of months ago, my dreams came true. I had a couple of issues with my bike that I was slow to fix. That meant walking to and from work. I discovered that this gave me regular time to listen to podcasts, instead of just listening as-and-when I had the chance. That and the fact I finally started using a podcast client (that downloads new episodes of podcasts you’re subscribed to) meant that I found myself wilfully not fixing my bike, because I wanted to keep my daily podcast itch scratched.

I have since fixed my bike, and resentfully ride the 6-8 minute journey to and from work. But as I usually do a Top 10 albums of the year thing for fun, I figured it’d be fun to do something similar for podcasts. So here it is.

I was a big fan of the show Community that ran for six seasons. Netflix’s clever little algorithm put me onto Harmontown – the documentary which is where I first discovered the existence of the podcast. Dan Harmon, the creator of Community, and more recently, 50% of the creators behind  Rick & Morty gets on stage on a Sunday evening in L.A. alongside Jeff Davis, a regular on Whose Line Is It Anyway, and Spencer Crittenden, their dungeonmaster (let’s put a pin in that). There’s never much of a plan for shows. It largely consists of Harmon monologuing his way through whatever is on his mind at the time, with Jeff and Spencer either supporting or antagonising Dan. Occasionally things descend into farcical improv, or Dan raps; sometimes there’s guests, sometimes audience members are brought up. Spencer’s story is great though. He attended his first Harmontown as an audience member when Dan decided he wanted to start playing Dungeons & Dragons on the podcast. Spencer became their dungeonmaster, and is now an integral part of the show, as well as ultimately getting to DM on a D&D TV show – Harmonquest.

As well as the podcast version, if you pay $5 a month you can watch the show live as it’s recorded. I’m a freeloader, so I don’t subscribe, but the upshot of them filming it means end up seeing videos on YouTube of various chunks of the show. Below is a Dan rap from when a thousand people a day were asking him when Rick & Morty Season 3 was coming out. By the end of the rap, he talks about how Superman is susceptible to gout. That’s a pretty good indicator of how the show goes. 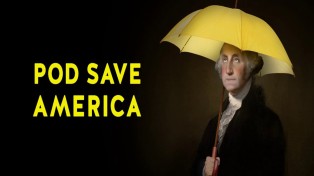 If there ever was a time to get more interested in American politics, now is probably that time. For one thing, it can help you feel better about the momentous shitshow that is Brexit, due to the fact other countries can be equally self-sabotaging, so that’s nice. I’m used to having a superficial understanding of what’s going on in the US, based on whatever news makes it across the ocean. The joy of listening to Pod Save America is that you get much more of a dissection of what Trump and in particular the GOP are doing to the US. You get some honest criticism of Democrats. And you get some laughs too.  The show is run by Jon Favreau, Tommy Vietor, Jon Lovett, and Daniel Pfieffer, who all had various roles within the Obama administration. Jan Favreau was Obama’s chief speechwriter during his 2008 election campaign and for several years while he was president, while Jon Lovett worked as a speechwriter for both Hilary Clinton and Barack Obama. That expertise in communications is probably one of the big reasons why they have managed to create something that’s in-depth and analytical, but at the same time accessible and funny.

They frequently have guests on, and are doing their best to encourage grassroots Democrat activism, which will be super-important to help potentially flip the Senate in 2018. And if you want to know why that’s important, then it’s probably worth listening.

This American Life is the king of podcasts, so if you haven’t heard of it, and you’re into podcasts, you’re doing something wrong. Even before I get into This American Life, the fact that they are the producers behind two monster podcast hits (Serial and S-town) should tell you what you need to know. These guys are experts at telling real-life stories. This American Life is a weekly podcast that typically has an overarching theme each week, with 3 or 4 short pieces related to that theme, although occasionally they’ll dedicate an entire episode to one story. One of my recent favourites was where they followed the story of a car dealership for a month. Every month, the dealership is set a sales target for the month by the car manufacturer. If they make the target, they get a big bonus. If they are short of that target, even by one sale, they get no bonus. A handful of different salesmen are followed for the month, each fulfilling different roles. One is the all-star salesman, who frequently has more than double the sales of anyone else. One is one of the worst performing salesmen. One is the boss of the chain. One employs a strategy of saying yes to whatever offer a customer lays down regarding what they want to pay, although often then gets them to change it down the line. All the parts come together right at the end of the month as they battle to make it to the sales target, even selling cars at a loss just so they can try to make the target. This American Life are just so good at telling stories, you can’t help but become instantly captivated by whatever story it is that they are telling.

Criminal is a short, bi-weekly show. All stories are based on true crime stories, but take on much more of a broader scope than a lot of true crime shows do, and often go for more surreal stories. For example, one episode interviewed a botanist on how she randomly ended up becoming the go-to person for government agencies wanting to analyse people’s stomach contents, to help determine time of death. Another detailed the story of Carrie Nation, who strongly opposed the sale of alcohol in the late 1800’s. She did this by smashing up taverns with a hatchet she carried around. All stories are brilliantly told by host Phoebe Judge, who has one of those perfect radio voices. I just listened to an episode this morning called ‘Unexpected Guests’ that was created after the show asked listeners to email them with stories similar to a story they told some months ago, about a woman discovering after several months that someone was living in her attic crawl space. As with This American Life, there’s two aspects that make this a great show. First, that they are real stories, typically told by the people who have experienced them. Second, the way the show is produced is spot on. Phoebe Judge is a very natural interviewer, who seems to have a knack for getting the most out of people that she interviews.

Another true crime podcast, this one hosted by two L.A. based hosts, Karen Kilgariff and Georgia Hardstark. 50% of the show is just the two of them talking about everything and nothing in between, like how much they love Del Taco, or talking about other shows or podcasts they have been into that week. Then each take their turn telling a true crime story. The show leans heavily on support for victims, rather than attempting to glorify the bad guys. One of the catchphrases is “fuck politeness” as so many stories come about as a result of people just being too trusting of strangers. While the stories they discuss are at times quite dark, they often find humour in those dark places, which is what makes the show so great.

The first thing to love is the host of Spontaneonation, Paul F. Tompkins. He’s the voice of Mr Peanut Butter in Bojack Horseman, so it’s like listening to a podcast made by Mr Peanut Butter, which is probably my #1 dream. Plus he’s effortlessly and endlessly hilarious throughout. The show starts with him interviewing a guest, starting with a question asked by the previous week’s guests. Recent guests included Ira Glass (of This American Life fame) and Ted Leo (of one of my favourite album’s ever fame). Then they have a different set of improvisers on each week, and they will create around half an hour of improv from a suggested location, and typically weave in points from the interview that week. One of my favourite episodes has to be “a deliberation room” where four improvisers ultimately tried to play the role of 12 jury members AND an orderly, which ended up being just as chaotic as it sounds. This is just an endlessly funny show.

I first listened to this satirical news podcast back when John Oliver was a part of it, along with Andy Zaltzman. Now that Oliver (AKA Jonny Showbusiness, according to The Bugle Wiki page….no really) no longer does the show, a rotating set of hosts take part alongside Zaltzman. I started listening again recently, and heard a live show where he was joined by Nish Kumar and Alice Fraser. It’s the kind of show that will actually make you laugh out loud in public, making you look insane to strangers. A highlight from that recent live show was Nish Kumar talking about how he accidentally encouraged Buglers (the term given to fans of the show) to edit his Wikipedia page, with some very high concept results. Some of that spillover is quite possibly the reason for John Oliver’s nomenclature listed above!

I started listening to Off Book after I heard Paul F. Tompkins (of Spontaneonation / Bojack fame) was the guest on their first ever episode. The show is another improv show, but this one is an improvised musical. Hosts Jess McKenna and Zack Reino host each week with a random guest, and I’m continually amazed by their ability to improvise hilarious songs, and to make them rhyme. All the stories are typically as surreal and ludicrous as Spontaneonation. During an episode where one character was following their dream of becoming the person who demos shamwows in malls, one character goes to buy a pretzel, and I think it’s my favourite song they’ve done so far. The highlight has to be Zack Reino just nailing the improvisation of the song, but then struggling to do maths under pressure. You can listen to it below!

Posted in Everything Else