I’m living a cursed life. I ate my first ever Asian bun (bao) in China. I followed that by eating about 100 more, still in China. I spent three weeks there when I was 20, and discovered that you were never more than 400 metres away from someone selling something delicious. Most of the time, I’d go for a char siu bun, which is a delicious BBQ pork variety, often made with something along the lines of soy sauce, honey, brown sugar, rice wine, hoisin sauce, and Chinese five-spice.

I came home depressed, thinking that now I was 4,000 miles from a good char siu bun. If I’m ever in London, and anywhere remotely close to Chinatown, I’ll always make a sharp b-line toward one of the Asian bakeries there. The great irony is that the bus stop I wait at to get a bus from Oxford to London is in St Clements, literally outside of Rachel’s Café, a nice looking Asian bakery.

Occasionally I would actually look inside through the window, and could see buns 10 feet away from me. Somehow, whenever I thought about going inside to get something, the bus would always arrive, right on cue. It’s like the bus drivers of Oxford don’t want me to be happy, although that’s probably how everyone in Oxford feels generally.

One day fairly recently I just missed the bus I wanted, so I actually had 20 minutes to kill. I stepped inside Rachel’s Café, and now I’m happy, because I know I’m 400 metres away from a good Asian bun, at least when I’m at home.

First up, the important stuff. The place is independent, so that makes hipsters like me happy. Second, everything is home-made, so you know it’s good. So much of my bao disappointment in the UK has come from eating what’s clearly mass-produced stuff, which always lacks a little something. 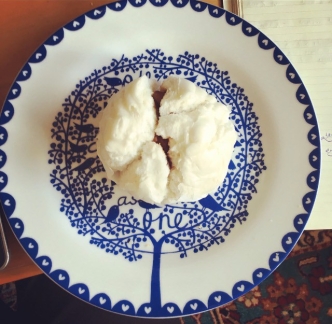 Let’s start with the char siu bun. When i was younger, and flying on a plane, I always wanted to open the window, and grab a passing cloud. Of course, that would have been the last thing I ever did if that actually happened, besides falling to my untimely death. But a good bun to me makes me think about eating clouds. They have this part-baked, light quality that just makes me want to bake one into the shape of a hammock and lie in it. And then eat my way out. But as well as having the right texture and flavour to the bun itself, the filling needs to be generous, and delicious too. Fortunately, the buns at Rachael’s are. The pork is super-tender, the sauce has the right level of sweetness and flavour, and the volume of filling is great.

On another visit, I also tried the pastry version of the char siu. With the same filling, you can’t really fail, but you have the added benefit of a little more crunch if that’s your thing. I also tried their coffee, and that in of itself is worth a visit. Plenty of places in Oxford do pretty average coffee, so it’s something easy to phone in, but they get it right here.

They also do plenty of sweet pastries, and Bánh mì baguettes. I’m working up the courage to trying something else, but I can’t stop myself from ordering as many char siu buns as I possibly can every time.

You can find Rachel’s online here, and in the real world here: 55 St Clement’s St, Oxford OX4 1AG. Important note – It’s a cash only place, so be sure to bring some!